“The idea of working in a job where my sole goal is to help and empower people, that’s really what I want to do with my life,” says British volunteer Sam Huckstep. He spent a year on a European Solidarity Corps placement with the French Red Cross in Orléans, north-central France. 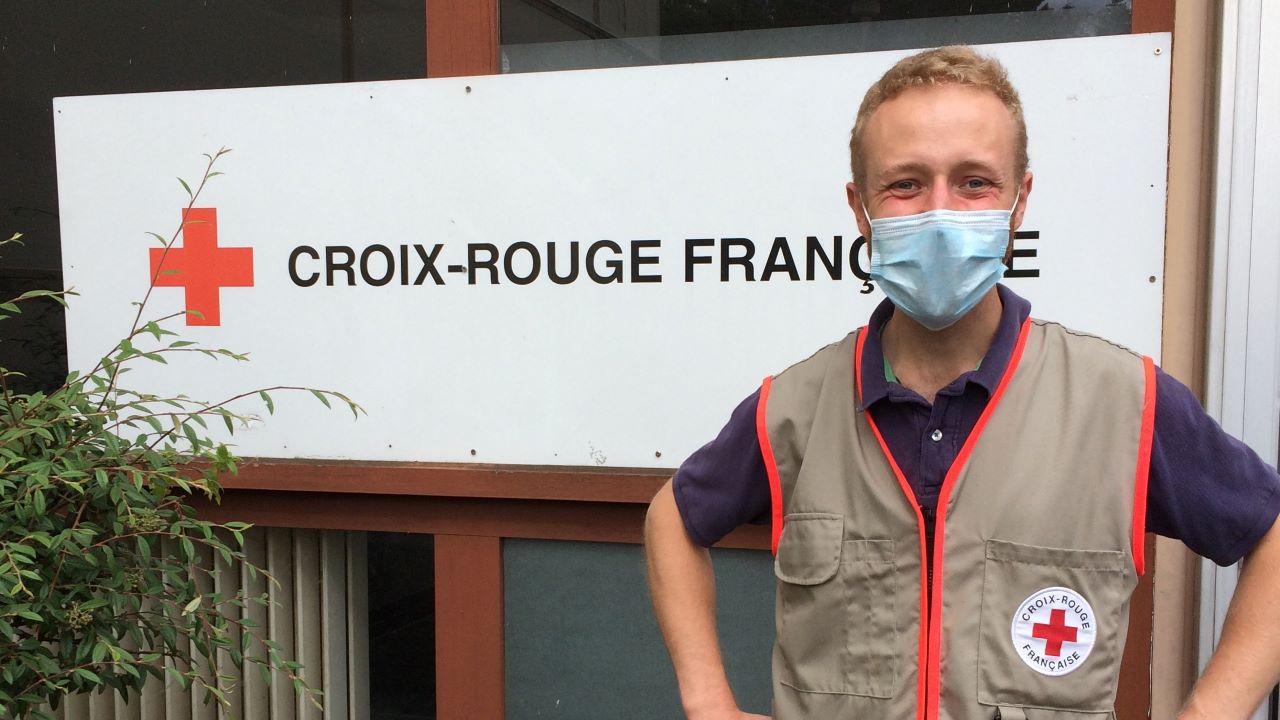 Sam grew up in Oxford and spent four years at university in Scotland, where he studied Modern History and English Literature at St Andrew’s. The 24-year-old found out about the placement while attending a course in NGO management at university. He wanted to gain experience in working in a non-profit setting to help other people.

“This European Solidarity Corps placement offered exactly that and, even better, it offered a chance to do it in France, so I’d be able to improve my French language skills, and with the Red Cross”.

Sam started his placement in August 2019, supporting unaccompanied minor migrants in Orléans, most of them 16-18 year old boys who were French speakers. His role was to welcome them in a dedicated room equipped with a football table, a little snooker table and a coffee machine, where they could get personal items such as clothing and hygiene products.

As part of a team, Sam helped with integration by setting up projects and researching opportunities for these young people. He helped with homework and with writing CVs, looking for apprenticeships and jobs, he played football, visited museums, and even shared idyllic moments with the young people, like toasting chestnuts picked at a nearby wood. These activities built trust, and some of the young people even shared that they hoped to become a volunteer themselves.

Many of these young people arrived quite nervous and uncertain. To notice how over several weeks, by coming here, contributing to and being part of a community of volunteers, they’ve opened up and visibly grown in self-confidence and being willing to express themselves – that’s something which really stood out.

Helping minors to get in touch with families back in their country of origin was another memorable experience for Sam. This was made possible through Restoring Family Links, an initiative managed by the International Committee of the Red Cross in cooperation with the International Federation of Red Cross and Red Crescent Societies.

Sam sent out text invites to minors for a workshop in Orléans run by Red Cross colleagues from Paris, and about 20 young people turned up on the day.

“Two of them, on the same day, were able to call their families. They still had the phone numbers, but they didn’t have the money to pay for a long-distance call. The joy on their face was huge. It can take quite a bit of effort, in terms of finding people for whom contact has been lost and being able to organise it. It really can change the lives of people of all ages, and it’s immensely satisfying to see,” he says.

In March 2020, when the lockdown due to the Coronavirus pandemic was imposed in France, Sam had to adapt his tasks. As it was no longer possible to carry out in-person activities, he put together boxes of books, board games and chocolates to keep the minors entertained during lockdown.

He then spent most of his time supporting the food distribution team. As a big part of their usual volunteering force was aged 65 and over and needed to stay at home, Sam and other young volunteers were reassigned during the crisis.

I also helped out more with homeless support and with a new service that was set up during the confinement that delivered boxes of food and medication to vulnerable people, especially to the elderly or those with immune disorders.

During his placement, Sam brushed up on his language skills, and he can now hold conversations in French. Besides teamwork and the variety of other skills he gained while organising projects, he has also learned skills related to building trust with shy young people and helping them to engage with, and enjoy themselves during, activities. He became particularly interested in the transition period that these minors face, which can be quite difficult.

“One of the things I’ve learnt about was the need for that perception of stability for these young people, and for supporting the transition from the period in which they are still being looked after by organisations – such as the Red Cross and local councils – to their life after the age of majority.”

This experience confirmed that, in the future, Sam would like to work in public service, whether it is for a charity, local government or a programme or enterprise which has the basic goal of helping people. He hopes to study for a Master’s degree in public policy soon. Reflecting on his experience, Sam recommends volunteering to everyone.

Volunteering internationally gives you a wonderful opportunity to meet people and to understand a different culture and a different environment, which helps enormously in being able to empathise with people, to understand where they are coming from and to connect across barriers.

visitor_type
Participant
category
Refugees and migrants
Volunteering
How can we help you?
Please fill in the form below:
For more information, please visit our Contact us page.